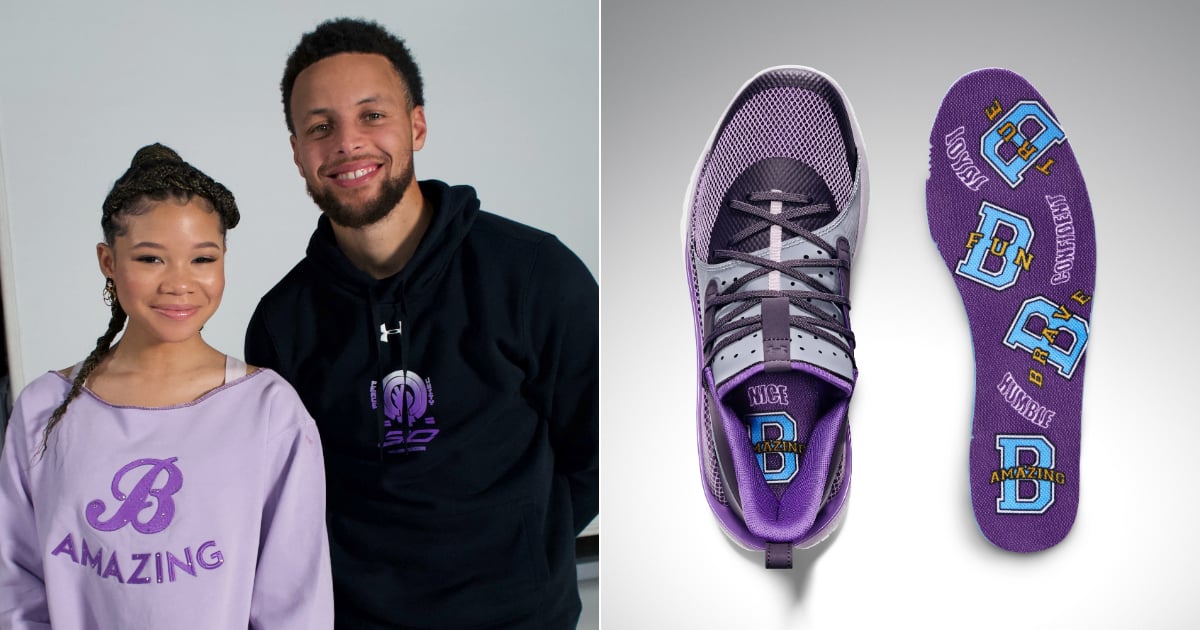 Let’s review Storm Reid’s resumé so far: she’s starred in A Wrinkle in Time and Euphoria, she lifts weights and nails hardcore workouts on the regular, and she co-founded Bamazing, an initiative aiming to empower women and girls. At 16, she just added yet another accomplishment to that list. Today, Storm announced her shoe collaboration with NBA superstar Stephen Curry and Under Armour. She and Steph worked together on the Curry 7 Bamazing colorway shoes, which are purple and covered with empowering, Bamazing-inspired phrases on the inner lining: Btrue, Bbrave, Bfun.

“I launched my Bamazing initiative with a goal to encourage young girls that they are truly capable of anything. They can and should be themselves, perfectly imperfect,” Storm said in a press release. “I think it’s so important to uplift and celebrate women in order for us all to continue to thrive.” She saw the Bamazing X Curry x Under Armour collab as a way to spread that empowering message, even releasing the shoes in honor of International Women’s Day on March 8.

It’s not the first time that Steph, who has two daughters and an infant son, has teamed up with an inspiring young woman to support girls everywhere. In 2019, he released the UA ICON Curry 6 United We Win shoe with Riley Morrison, the 9-year-old fan who’d written him a heartfelt letter asking why his Under Armour basketball shoes didn’t come in girls’ sizes. Steph responded and the correspondence went viral, culminating in their adorable collab. This year, it was Storm’s work supporting young women in their dreams, as well as her own work as an up-and-coming filmmaker, that inspired these new, girl power-filled shoes.

Proceeds from Storm and Stephen’s new shoe will support Steph and Ayesha Curry’s International Women’s Day scholarship, run through their Eat. Learn. Play. Foundation and Under Armour. The purple sneakers are officially available March 6, but you can check out photos and behind the scenes action with Storm and Steph ahead!