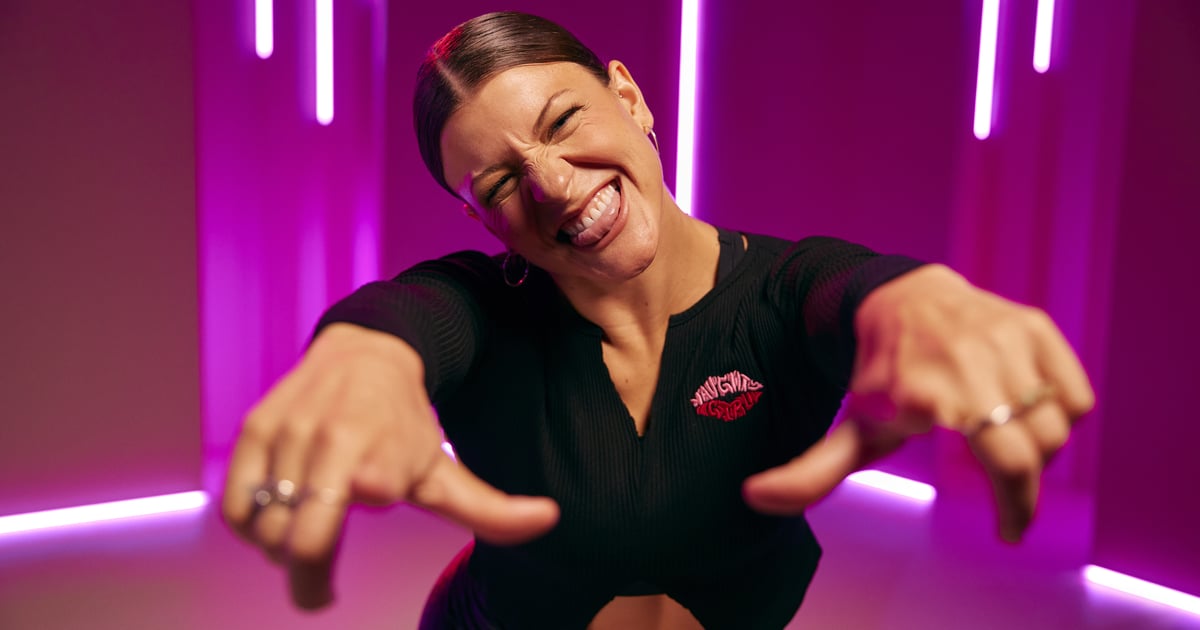 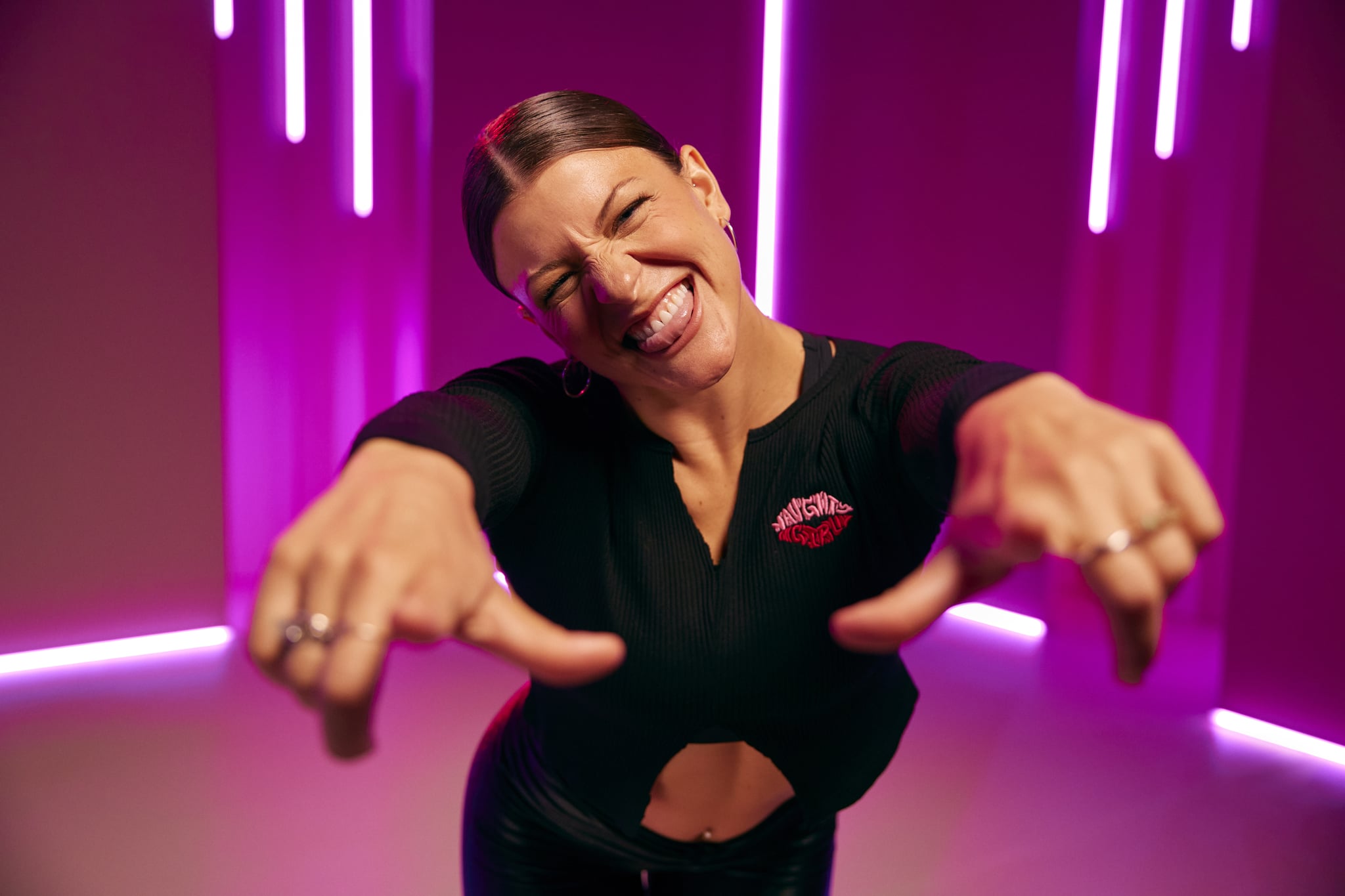 Catch Janelle Ginestra and the other Dance Fitsugar trainers in new episodes dropping every Friday on the POPSUGAR Fitness YouTube Channel.

In 2020, dancer and choreographer Janelle Ginestra‘s world was being deconstructed. Couple the global pandemic with a divorce from her partner of 10 years and ensuing financial distress and it made for the “biggest thing I think I’ve ever been through,” she says. But cutting her teeth in competitive Hollywood dance auditions year after year taught her to persevere, so she did. Ginestra came out the other side — stronger, wiser, and more liberated than ever.

It was in this transformational period that she found her own voice and purpose in the creation of Naughty Girl Fitness, a workout platform that blends fitness choreography with unapologetically sexy dance moves. (Think: Learning the choreo to Cardi B’s “WAP”, but with a few strategic lunges and squats sprinkled in.) Now, as a new host on POPSUGAR’s Dance Fitsugar series, Ginestra is introducing a whole new audience to her back-snapping, booty-shaking, inhibition-releasing dance workouts, and inviting them to find their empowered alter ego in the process. Are you in?

Making Her Success, One 8-Count at a Time

Ginestra didn’t come out of the womb dancing, but she may as well have. At just 2 years old, her dance journey began after she made it clear to her mom while watching a dance recital that she desperately wanted to dance, too.

“Movement always really called to me . . . I’ve done dance. I’ve done karate. I’ve done cheerleading, pom team. I was a child actor. Anything that emotes or promotes moving, I love. I just feel like I don’t know who I would be without it,” she says.

At 18, Ginestra told her mom she wasn’t going to college and was instead moving to LA to become a professional dancer. It took her nearly five years of auditioning — consistently making it to the final round only to be turned away — to book the kind of gigs she wanted. In the end, she realized that all these opportunities were passing her by for a reason: they just weren’t the right fit.

“This industry can be very hard, but you have to just be able to navigate it. You might not get exactly what you’ve hoped for, but you’ll get something that’s right for you if you stick it out,” she says. It’s all about having “thick skin and the right mentality.”

For Ginestra, her “Goldilocks” gig was a spot on Pink’s 2013 world tour. From there, her career took off: she toured with J Lo and appeared in movies such as “Fired Up!” and “Bring It On: Fight to the Finish”, plus music videos with Nicki Minaj and Justin Bieber. She began to shift her focus to choreography and has since created performances for J Balvin, Pitbull, Bad Bunny, SZA, JoJo, and Halsey, working on the Billboard Music Awards, American Music Awards, Latin Grammy Awards, “The Voice,” and Coachella. She’s also become a well-known dance personality in her own right, with 480,000 subscribers on her YouTube channel, where she shares videos she choreographs, produces, and often stars in herself.

Finding Herself Again at 31

In the fallout of her divorce, Ginestra had to make use of the thick skin she built in the dance studio — and what resulted was a period of major personal growth.

“Having the belief in myself to reinvent myself and say, ‘I’m not going to let this ruin what I know I’m destined to do,’ was probably the biggest confidence blanket I’ve ever had to put on,” she says. And like so many people who endure difficult things, Ginestra has found insight in that journey. “I tend to try to find the good, and there has been so much good that’s come from it. I know who I am, and I found so much more of myself.”

During that post-breakup period, she produced her favorite video to date, called “to janelle, from janelle”, which you can watch on YouTube. “It was a compilation of every emotion that I went through during that time,” she says. “I’m so happy that I produced that because forever I will look back and remember that Janelle and what she was going through.”

The lesson hammered home by the experience — and exemplified by the video she created to document it — is that “everything is temporary,” she says. And in the end, it helped lead Ginestra to the second act of her dance career, which may just be the most fulfilling one yet.

As someone who can’t stop moving, fitness has always been a big part of Ginestra’s life. “Conditioning is always something that resonated with me and that I would never shy away from. Anytime we had to do conditioning at dance, I’d be like, ‘F*ck yeah,'” she says. “I liked to be one of the strongest.”

When she was going through her divorce, she used workouts as a self-care practice and to tend to her mental health. “When I wake up and work out, I have a completely different day versus when I don’t,” she says. In the morning, she would hit up her garage gym and put on her favorite music. “I was doing these choreographed workouts to the music, adding butt shaking and touching my body, just feeling myself to keep myself entertained. I was like, this is really fun. This could be something people would f*ck with: a choreographed fitness routine.”

She filmed a sample of the style with a friend and posted a video on her TikTok to see if people would respond, and it started gaining tons of attention. In that moment, Naughty Girl Fitness was born. You can now stream the workouts across devices on the designated Naughty Girl Fitness app and catch teasers of the routines on her TikTok, which has amassed 3.5 million followers since she posted that first spicy workout vid.

The goal of her workouts? Tap into your inner naughty girl, or whatever your personal alter ego may be. “The naughty girl is not afraid to take up space, and she feels sexy in any room,” Ginestra says. “Yes, she’s a badass chick at working out — or a dude, or whatever you identify with — but she mainly just feels really good about the skin she’s in.”

While there’s still plenty of focus on form, reps, and strategic programming, Naughty Girl Fitness is anything but prescriptive. Conversely, it largely exists to push you outside your comfort zone — in fitness, and in life. “I think that as women, we’re so accustomed and prone to judging ourselves — and I still judge myself sometimes,” Ginestra says. “I mean, I’m human. But Naughty Girl is the time to be free. It’s your time with yourself to touch yourself and not say messed up stuff. . . . [to be] nice to yourself.”

You can get a taste of her style in new classes on POPSUGAR’s YouTube channel; Ginestra will be bringing that same Naughty Girl vibe to the Dance Fitsugar stage. While Ginestra makes it all look easy, twerking, body rolling, and hair whipping don’t exactly come naturally for most of us. Just promise to give it a try, and rest assured that being in a space of discomfort is exactly where growth happens.

“If you feel awkward during the movements, what do you expect from yourself? You’re not a professional,” she says. “Allow this space to feel the awkwardness. Giggle at yourself. It’s OK to laugh . . . You’ve got to allow the freedom for yourself to feel all the emotions.” And while you’re working on it, Ginestra will be there with plenty of positive affirmations — directed at your inner naughty girl, of course — along the way.