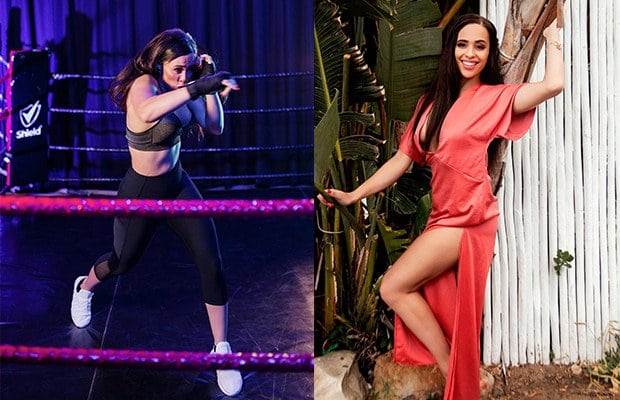 Actress Nicole Bessick, better known for her role as Chole Hendricks on eTV’s Broken Vows, is taking SA’s entertainment — and boxing — industry by storm. The 25-year-old stepped into the boxing ring back in 2017, when she was challenged by her opponent to compete in the annual Celebrity Boxing Event, which sought to raise awareness around bullying.

Being a victim of bullying herself, Nicole faced the challenge head-on and joined the line-up as one half of the first female celebrity boxing match on the continent. Dedicating herself to training like a professional boxer, Nicole came out on top and was crowned the female #BullyProof Celebrity Boxing Champion.

We chatted to Nicole about her journey into boxing, how it’s changed her life and why she recommends all women try out the sport.

My combat training began in response to needing to be able to do my own stunts on set. I fell in love with the sport and the process, and have since taken it up as a hobby.

And what are the body benefits?

Boxing is a full-body cardio workout that focuses on both the upper and lower body while burning fat and building lean muscle. The physical benefits can be seen quite early on in fight training, but what I find truly amazing about the sport is that it fosters a holistic approach to fitness. The mental strength and life skills you take away from it is just something else!

How has your life changed since you started boxing?

I lead a pretty active career and lifestyle. I jet from the gym to set, then back to the gym every day, and would often find myself frazzled and unfocused prior to fight training. Since taking up fighting, I’ve become a lot more balanced and protective of my energy. For me, it’s reinforced time management, discipline and dedication, but most importantly taught me the importance of rest, recovery and recharging.

Do people ever get weird about you doing a sport that’s not traditionally feminine?

Absolutely. Being a strong feminine force in any male-dominated space requires a thick skin and indomitable will. There’s a long list of stereotypes around what women should look like and how they should behave. I like to throw these stereotypes square on their head. That’s how I got the nickname “Action Barbie”. When you look past the lashes and nails, you’ll know I have a healthy appetite for extreme sports and adventure. Anything fighting, fast car or firearm-related really gets my engine going.

Of course, there are plenty of stereotypes around women and what their appetite in hobbies should be, but I like to give them the proverbial middle finger. I’m a lot stronger than most men I meet. It’s important to me to be able to show young girls that we can step toe-to-toe with our male counterparts, dominate them in whatever field we choose (sports, academics, business) and we can do all of that looking and behaving however we choose.

It depends on the type of sparring you’re doing. “Technical” and “conditional” sparring form part of your daily training. It’s really light, you’re just barely making contact and, as the names suggest, it’s more about the technique than anything else.

“Open sparring” is what you’re doing a few weeks out from a fight — now that’s a whole other ballgame. They say “boxing is all fun and games until you’re getting hit in the face”, and that saying couldn’t be truer. I’ve nursed too many cuts, bruises and black eyes to count. It’s not for the faint-hearted, but if you have an appetite for it, nothing beats that boxing ring high. You get right back in there the next day, better and more empowered than before.

READ MORE: Connie Ferguson Dishes Her Secrets To Looking This Good At 49

Were you ever shy about being aggressive?

No, I think that’s the biggest misconception about the sport — that you need to be aggressive to be good. An emotional fighter is a weak fighter. When you get into the ring, someone is going to spend the next five rounds trying to take your head off. You need to operate from a calm, focused headspace and quick feet.

Any advice for aspiring fighters?

Start now! Martial arts is the perfect way to get in shape because it approaches health and wellness as a whole. Not only is it an intense full-body cardio workout that engages the body, burns fat and builds lean muscle… it’s also a great way to have fun, learn a new “real world” skill and walk out of a session feeling more empowered than when you walked in.