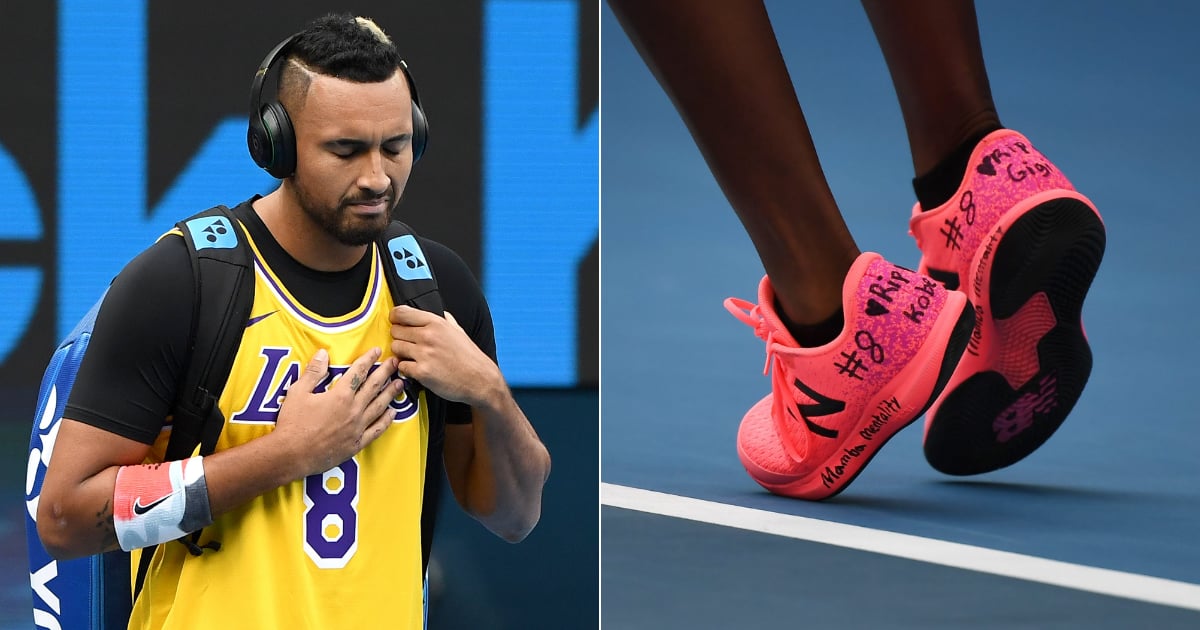 The entire world of sports is mourning the loss of one of the greatest athletes of all time, Kobe Bryant, who tragically died in a helicopter crash on Jan. 26 along with eight others, including his 13-year-old daughter Gianna. The following day, tennis athletes playing in the Australian Open found ways to honor the late basketball legend.

In a women’s doubles match, teammates Coco Gauff and Caty McNally customized their sneakers by writing Kobe’s retired jersey numbers, as well as “Mamba Mentality.” Following the match, Caty shared a photo of her sneakers on Twitter and wrote, “For you Kobe and Gigi.” Coco, meanwhile, described Kobe as the “definition of intensity” in her tribute on Twitter.

“It was pretty heavy all day.”

Nick Kyrgios appeared overcome with emotion when he arrived at his singles match against Rafael Nadal. The Australian player even wore Kobe’s Los Angeles Lakers jersey during his warmup. Nick spoke about his love of basketball in a press conference following the match: “I’ve been following it for as long as I can remember, so obviously when I woke up to the news I was pretty emotional. It was pretty heavy all day.” When asked if the news at all distracted him, Nick said, “If anything it motivated me. If you look at the things he stood for and what he wanted to be remembered by, I felt like if anything it helped me tonight.”

Nick’s opponent also honored Kobe in a postgame interview. Wearing a Lakers cap, Rafael said, “What can I say? I woke up this morning with this terrible news. Super sad. He had been one of the greatest sportsman in the history.” He added, “He had been a true inspiration for the world of sports and for a lot of kids. It’s one of those days that you want to forget, but of course Kobe Bryant will be in our hearts and in ours mind for the rest of our lives.”

See pictures of the many ways Kobe was memorialized at the Australian Open ahead.