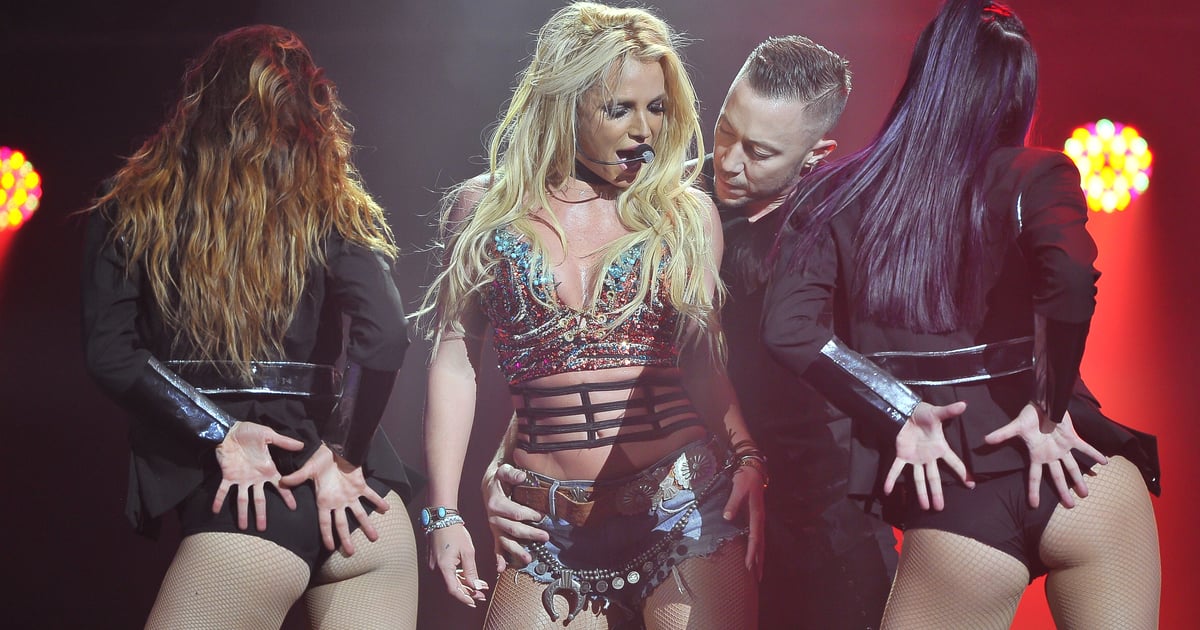 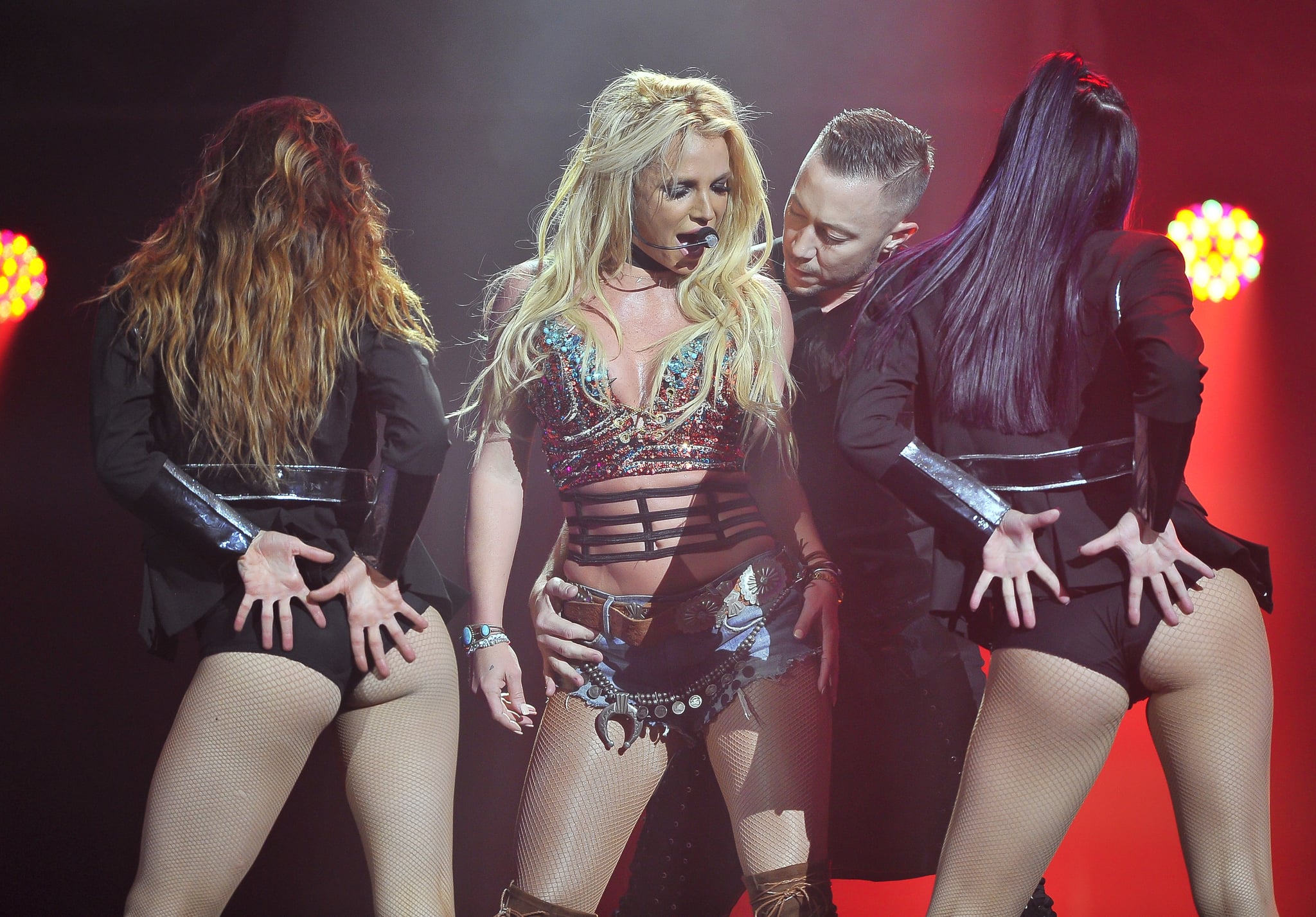 Earlier this week, Britney Spears posted a picture of a quote on her Instagram that came as a shock to many of her fans. The quote, credited to comedian Rodney Dangerfield, says, “I found there was only one way to look thin: hang out with fat people.” In her caption, Spears wrote, “I wish I could have chosen the nannies for my children . . . my dancers . . . I mean if I had Christina Aguilera’s dancers I would have looked extremely small . . . I mean why not talk about it ??”

Spears has since apologized in a follow-up Instagram post, but while some have appreciated the effort, others say she should apologize directly to Aguilera’s backup dancers. “To be honest, I’m not trying to be critical of anybody,” she wrote in the apology. “What I posted is a projection of the insecurities I deal with all the time as a result of how my parents and the media have treated me . . . I would never intentionally body shame anybody because I know what it feels like.”

In the first post, she went on to reference the controlling nature of her conservatorship. “Don’t you think my confidence would have been a bit better if I could choose where I lived, ate, whom I called on the phone, dated and who was on stage with me !!! It’s hard sometimes now I see how much of my womanhood was stripped away at that time and every person sat back and didn’t say a thing !!!”

“We will not be perfect in pursuing positive body image, and there will be lapses because this message is so ingrained. I think we need to have that self-compassion in order to move forward with challenging fatphobia.”

While she’s not wrong to grieve her years of lost autonomy, people were quick to point out that this was not the way to do it. One commenter wrote, “No need to put another woman down to feel better about yourself. Focus on your healing,” and others called out the fatphobia directly. UK fashion blogger Danielle Vanier commented, “No Britney, what we’re not going to do is slate other women whilst trying to boost our own self confidence. This is not it.”

Spears is in a unique situation — which does help us understand why she might have posted these things — but it doesn’t excuse her behavior. POPSUGAR spoke to body-image experts who shed light on why Spears may be acting the way she is, plus what we can learn from her and how we can address fatphobia in ourselves and others.

How Does a Lack of Bodily Autonomy Impact You Long-Term?

Spears wrote in her apology message, “I struggle with this because of how I feel about myself, not because I hate how anybody looks . . . I feel like my family knew I was insecure and people were trying to purposefully feed into this insecurity by not letting me have a choice in the people who were on stage with me.” When you grow up with very little bodily autonomy, it makes sense that it would show up in your life as an adult, Holly Schiff, PsyD, licensed clinical psychologist, says. “Sometimes it manifests in a way where you try to overcompensate and exercise control over your own body,” she says, referring to examples of Spears posting nude photos on her Instagram as a way to celebrate her body. “It is about control and agency and knowing that you are dictating these things for yourself.”

That attempt to control your body and appearance as an adult can also show up in eating or exercise habits, Erin Decker, a body activist and eating-disorder dietitian, says. “Controlling our bodies through food can feel like something we do have autonomy over.” This need for control can be a slippery slope leading to body-image struggles and disordered eating, which can backfire in many different ways. “It can figuratively and ironically keep you feeling ‘small,'” Decker says — something Spears references in her caption.

Why Fatphobia Is So Harmful — and How to Shut It Down

Fatphobia is a bias based on body size, and Spears’s comments are a prime example. Our culture has taught us to associate a person’s body with their sense of worth, explains Justine Grosso, PsyD, licensed psychologist and wellness speaker. “It’s the idea that some bodies are less worthy of respect and acceptance than others,” she says. “This perpetuates the idea that people with bigger body shapes are in some way morally inferior, which can contribute to a sense of shame and self-judgmental thoughts.”

If you think you’re guilty of fatphobic thoughts or feelings (whether directed at yourself or others), first try to pay attention to when your mind slips into comparing your body to others or assigning value to appearance. If you practice replacing judgment with compassion, “you can help rewire habitual thought patterns,” Dr. Grosso says. It may take some time to change these habits, so it’s important to give yourself grace, Decker says. “We have thousands of thoughts per day, and it’s unrealistic to catch them all.” And lastly, allow yourself to get mad about these made-up beauty standards. “Recognize how TV and movies perpetuate insecurity,” Dr. Grosso says. “Getting angry about it may help externalize self-judgment.”

And if you’re witnessing other people engage in fatphobic behavior? While you may want to educate them, remember that some people “may not truly understand the depth of the impact [of fatphobia] unless it’s something they have experienced firsthand,” Dr. Schiff says. Decker adds that planting “small seeds” can sometimes have a bigger impact than a dedicated conversation with someone in your life who is consistently fatphobic. “This means changing the way you think and speak about bodies, bringing mindfulness to your own judgments and insecurities, and sharing information with those who are curious.” That being said, when the comments are directed at you, you should prioritize setting boundaries. “This can be really difficult to do, especially if you grew up with little autonomy, similar to what Britney described,” Dr. Schiff says. “Working with a trained therapist can be helpful if that’s the case.”

What Can We Learn From Spears?

While Spears is on a healing journey, it doesn’t take away from the influence her platform has and the responsibility that comes with it. However, Spears’s apology is an example of her embracing that she lives and exists in a culture that does perpetuate these harmful stigmas. While it doesn’t justify the harmful message, Dr. Schiff recognizes that being in the public eye exacerbates any missteps. “I do think that Britney’s apology was genuine and, like she said, was projecting her own insecurities. It is also hard for her to improve her behaviors as she is constantly being undermined by her own family members as well as the press, and every move she makes is very publicized.”

Ultimately, it’s clear Spears and many others of us still have ingrained beliefs we need to work through. “We will not be perfect in pursuing positive body image, and there will be lapses because this message is so ingrained,” Decker says. “I think we need to have that self-compassion in order to move forward with challenging fatphobia.”