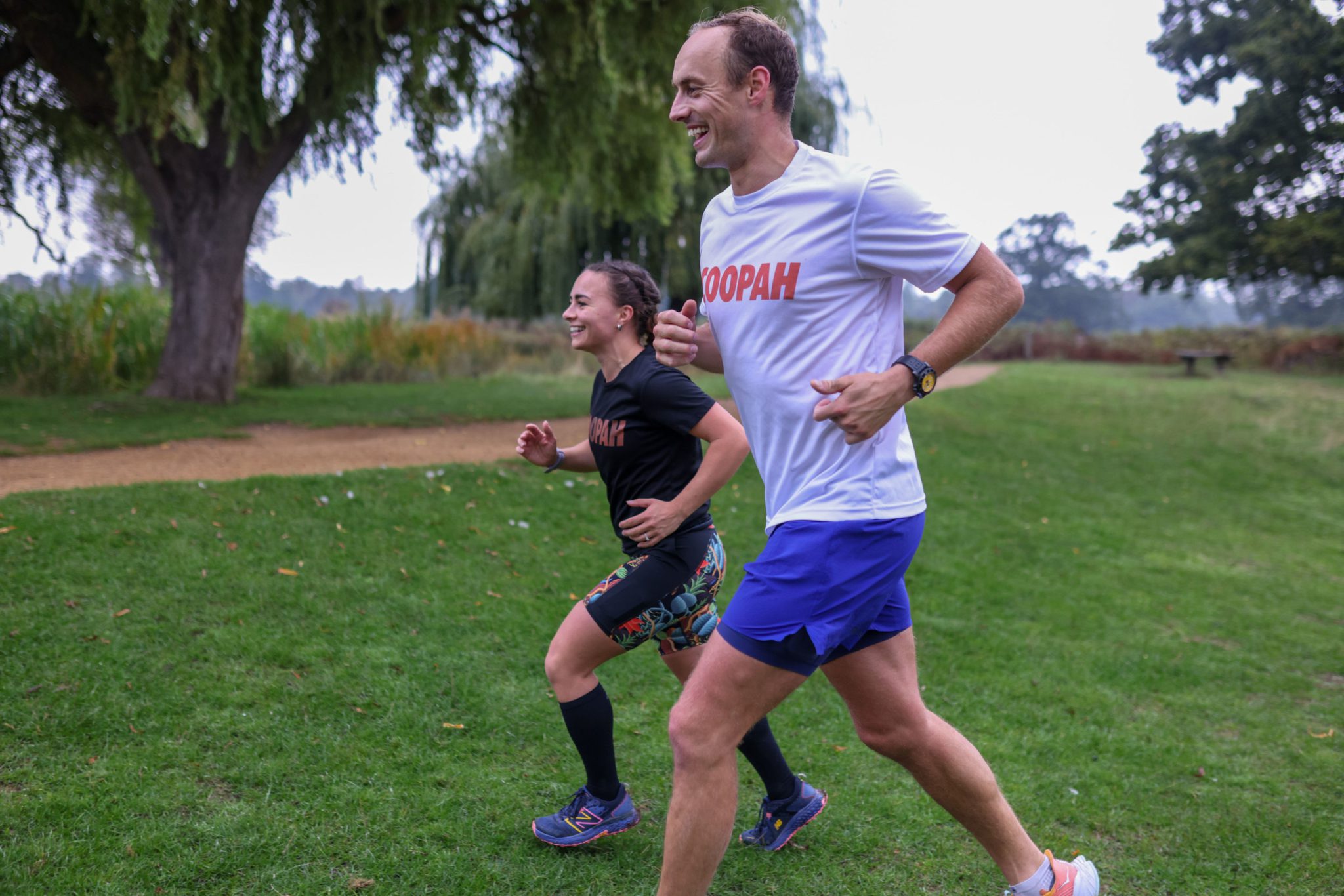 Every Saturday, at 9am, thousands of people run a lap or two of their local park, often meeting old friends and making new ones. For some, parkrun is a weekly, unmissable, ritual that keeps their mental health intact, for others, it’s the inspiration to wake up before 9am and set up their weekend, and for the rest, it’s a hangover cure. Whatever the reason, whatever the frequency, runners leave parkrun in a better place than when they started. 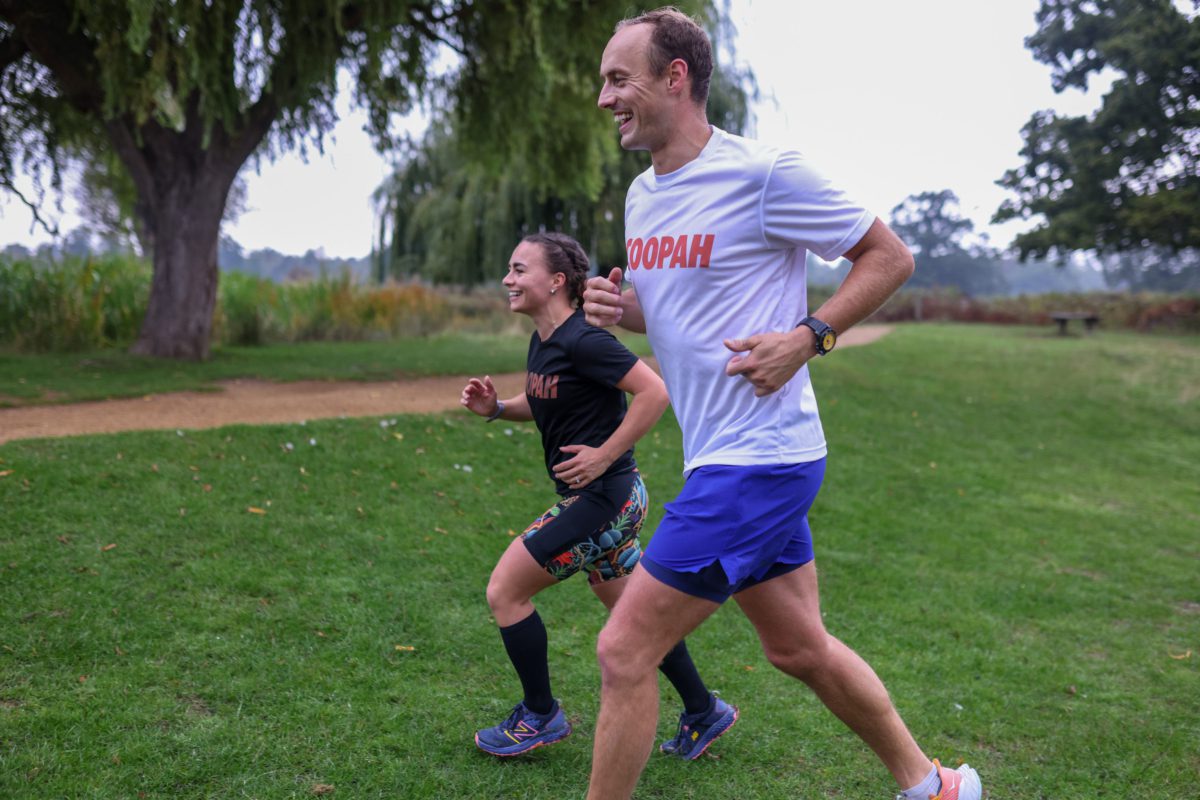 But for most parkrunners one 5km a day is enough. Not for George Bullard and Nat Long.

In an effort to highlight how many local parkruns are available and how training to run one is easy through apps like Coopah; they set off on a challenge. A challenge to see how many parkrun routes they could complete in a 24 hour period. The rules were simple; they’d both start at Bushy Park – the OG parkrun, at 9.30am on Friday and they’d meet ready for the Clapham Common pakrun at 9am on Saturday. They could go between as many other parks as they could between those hours and using whatever transport they liked. At each one they’d need to run the 5km parkrun route. George, the adventurer, decided he’d opt to cycle between each park – showing that sustainable travel always wins. Nat, the sensible one, opted for the speed and comfort of a car driven by Coopah cofounder Pete.

After being provided with a list of parkruns in south London, some all-weather kit from Janji and access to the Coopah app for training, George and Nat spent the last month working out their route and training their minds and bodies for 24 gruelling hours on the road. The race was on.

So, at 9.30am on Friday morning last week in the cold, drizzle of South West London Nat and George began the challenge. A brisk lap of Bushy Park completed and they were off to Kingston Park. By 4pm they’d knocked off Richmond, Old Deer Park, Fulham Palace, Wimbledon and Tooting Common and Nat had a slender lead on George. But then the challenge hit a steeplechase-sized hurdle. Pete, Nat’s driver and Coopah’s cofounder got a call from his wife to say that she was going into labour early. With only the slightest hesitation, Pete headed off to support, leaving Nat without a driver. With the night runs approaching we needed to make sure that there was no risk to Nat or anyone’s safety. Without Pete, Nat would have been running alone, so George offered a truce in the battle and a plan to work together to make sure they both could make Clapham at 9am. 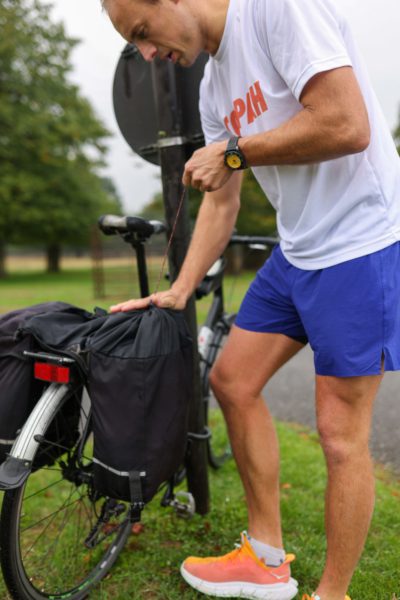 With a few brief food and nap stops the team both managed to grind out South Norwood, Crystal Palace, Catford, Sutcliffe, Greenwich, Charlton and Southwark before 1 am. Nat and George had recruited some dedicated friends and family to help them through the long night shift so equipped with a bit of company, high bright head torches, Sudocrem and sweets they powered their way through Burgess, Hilly Fields, Peckham, Dulwich and Brockwell parks. George with an hour to spare thought he’d not done enough running or cycling for the day decided to head to Battersea Park to add an unofficial 5km, bringing him to 21 x 5km run in 24 hours!

At 9am, at the start of Clapham Common parkrun, hundreds of runners had dragged themselves out of bed for their 5km ritual but alongside them were Nat and George who had spent the last 23 and a half hours running 20 parkruns. There was a mention at the start of their heroic effort, but as they started the race they slotted in amongst the other runners. They chatted to a few competitors and dragged their tired bodies over the line. The beauty of it all is that ParkRun doesn’t differentiate. You can be racing for a sub-16-minute run, doing your first ever 5km, taking your whole family along with you or racing your 20th parkrun of the last 24 hours and you’re welcomed in with open arms. Nat said at the end of the challenge ‘I’m not going to lie; I’m exhausted, but running with George and everyone was an amazing, happy ending to such an incredibly fun experience. I got to meet so many amazing people and now I want to do it all again to get 24 in 24 hours!’

Coopah created this challenge to show two things; the availability and accessibility of parkrun as a way of inspiring runners. It’s free, it’s local and it’s open to all. When George crossed the line at Clapham he said ‘one of the most inspiring things about this challenge was mixing with the other runners like Nat. It was a huge test of endurance, which I love, but I learned so much and got inspired myself by Nat and the other runners I met along the way. Running really does bring people from all walks of life together.’ The second thing was to show that with the right training any challenge is possible. Nat and George trained for the 24 hours of running with the Coopah app. George said ’the app made training fun and simple, as an adventurer I can be all over the world doing different things. The Coopah app is so flexible, I can tell it when I will have time to train and when I won’t and it sets the schedule around me.’ 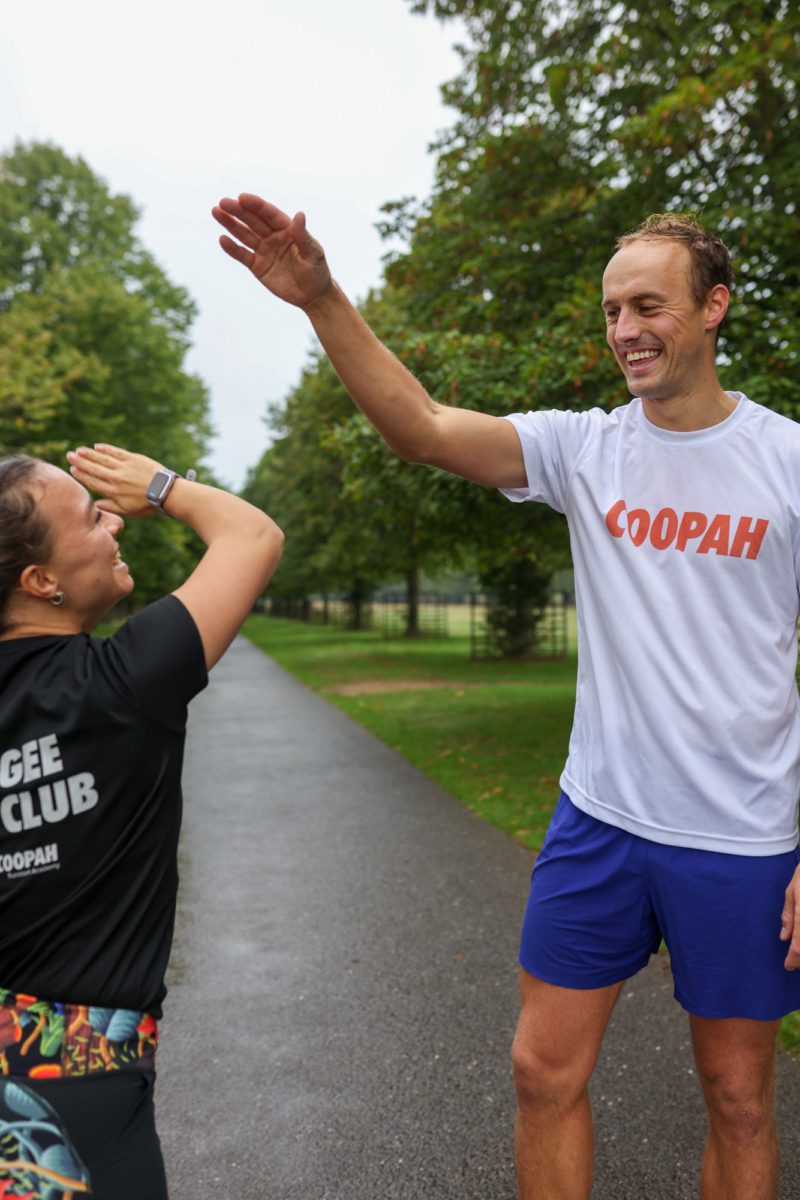 Coopah was built to reverse the mental health crisis. Pete, our founder, nearly took his own life after his Mum and best friend died in quick succession. Running turned his life around for him and now the team are building a business that can help do this for others. About the challenge, Pete said ‘The 24 hour ParkRun challenge epitomises what Coopah is trying to do in building awareness of running. I hope we’ve inspired at least one person to take up running, train using an app like Coopah and run their first parkrun  . Nat and George are just incredible people, they pushed themselves to the limit but did it with a smile on their faces and kept on telling the world about the benefits of running’.